XM is short for Experience Management. The process involves spotting the problems real time by monitoring or analyzing the interactions stakeholders have with a firm. The introduction of new software by SAP can help the companies provide better consumer, brand, product and employee experiences.

If decisions were earlier made from Operational data, with the introduction of XM, a new factor will also be involved in decision-making, the experience factor.

XM will help the firms to make intelligent decisions weighing both the O- data and the X-data.

French Popcorn company Nataïs and Bumble Bee Foods is using the SAP’s blockchain technology to empower their customers. Nataïs is the largest popcorn producer in Europe also the third largest producer in the world. Bumblebee foods on the other hand is the largest branded shelf-stable seafood company in the north america. Blockchain is the tractability solution that helps the consumers or anyone to track the region of origin, farmer, transport and everything about each individual product with the help of a QR scanning from a smartphone.

Bernd Leukert, executive board member of SAP, announced that SAP will be introducing a new fourty acre campus in India near the Bengauru airport. Bernd Leukert made this announcement during twentieth anniversary ceremony. Of the total eleven thousand employees SAP have in India, seven thousand of them are in R&D sector. Being twenty seven thousand the total number of employees in company’s R&D sector, it can be said that one-third of SAP’s R&D employees are from India. Dilipkumar Khandelwal, MD of SAP Labs, said that the campus project will start soon once the building plans submitted are approved by the government.

November 2018
German Tech giant SAP to purchase Qulatrics International for eight billion dollars
By Buying Qualtrics, SAP is planning to strengthen its customer relations management as Qulatrics is the company that does data collection and analysis to study the customer behavior towards a product. The purchase price 8 billion is worth 20 times the sales of Qualtrics this year.

November 2018
Orica with the help of company Cognizant, is trying to deploy SAP S/4 on Microsoft Azure cloud. Orica is one of the commercial explosives maker based in Australia. The IT company Cognizant is helping Orica to migrate to cloud. Cognizant said that the migration is nearly at its completion.

October, 2018
SAP has revealed its plan to invest in RPA or Robotic Process Automation to replace many manual repetitive back office processes by automation. The company also announced they are adding more features to its Leonardo Machine Learning. With this it will be easier for firms to build chat bots and other additional AI tools above it. SAP, by investing in its machine learning services, is planning to release OCR, isolating objects in images(image segmentation), recognizing similar documents from patterns in text, cloud text-to-speech & cloud speech-to-text capabilities (both of google’s) before next year.

it was recently they announced the introduction of cloud-based analytics availability. Not only cloud based, it is also packed with their new machine learning capabilities.

SAP to join hands with Alibaba

SAP decided to partner with Alibaba in China. According to the deal, SAP will offer their S/4 HANA and Cloud platform through Alibaba cloud to Alibaba cloud customers. With the new SAP cloud platform availability for the Chinese businesses who now use Alibaba cloud, they can integrate various useful third party technologies, build some useful custom applications etc. for their firms.

June, 2018
Teradata, a US company who was also once the partner of SAP SE, filed case against company SAP SE, accusing it of copyright infringement, trade secret stealing and for anti trust violations. 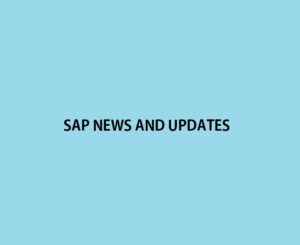 Everything to know about SAP ABAP

Why is Bloomlabs touted as the finest sap training institute in India?

What is ERP? Why you need it?

What is SAP? Full form, Modules and Jobs

Everything on SAP ABAP

How To ‘Create Company’ in SAP FICO

How to Create Table, Schema and Package in SAP HANA